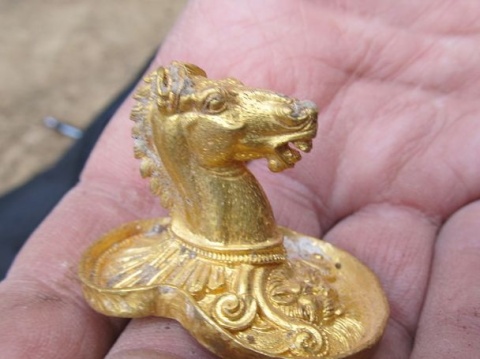 An object from the unique gold Thracian treasure recently discovered in Bulgaria. Photo by BGNES

Residents of Bulgaria’s town of Isperih plan to launch a petition to have the unique gold Thracian treasure, recently discovered in the nearby famous Sveshtari tomb, to be returned to them.

The news was reported by Standard daily, citing the secretary of the Town Hall.

The precious find is now on display at the Archeology Museum in the capital Sofia, but locals demand from the Culture Ministry to have it back in Isperih.

Isperih Mayor, Beysim Basri, has talked to the Director of the local museum, Boryana Mateva. Together with the museum and the police, the municipality is committed to preserve both the treasure and the archaeological reserve Sboryanovo with the Sveshtari tomb since treasure hunters have shown huge interest after the latest find.

The tomb is on the world cultural-historical heritage list of UNESCO.

Mateva notes that according to the Cultural and Historical Heritage Act, archaeological discoveries must be transferred to the museum which initiated the unearthing or to the storage closer to the site.

Basri is willing to back such petition, adding the Town Hall will ask the Culture Ministry to grant it a 10-year right to manage Sboryanovo. This way, revenues from ticket sales will go to the municipality, instead of the local museum, whose director leads the battle for the treasure.

On its part, the Town Hall will pay for the security and the maintenance of the site.

Mateva says people in Isperih are outraged because they could not even glance at the treasure found in their lands.

One week ago, Bulgaria’s Culture Minister, Vezhdi Rashidov, informed that the treasure would be soon displayed at the Louvre. He said the world-famous museum has provided one of its largest and central halls for the exhibit of Thracian culture on Bulgarian lands.

The treasure includes 264 unique gold adornments, which can be seen on display at the National Archaeology Museum in downtown Sofia.