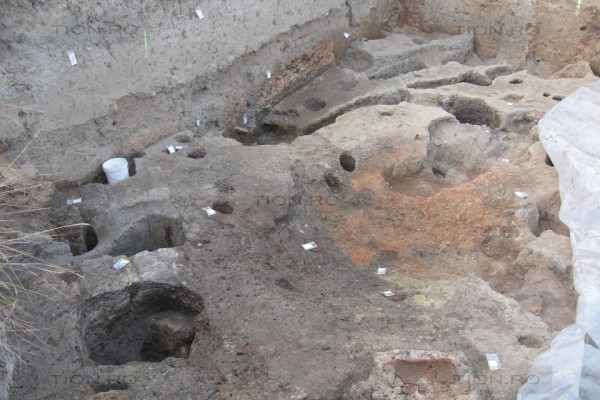 An impressive archaeological discovery was made by a team of archaeologists led by Professor Florin Drasovean on the the highway section Lugoj – Deva in Romania. The 50 tombs discovered in the village of Păru represent the largest necropolis of the Bronze Age found in Romania until now. Specific pottery and stone grinders used in funerary ritual, hundreds of homes in the thirteenth century BC were also discovered by archaeologists.

The research conducted during last summer led to the discovery of more than six sites that date back to the Bronze Age, Roman and Medieval periods on the highway’s segment Belint-Traian Vuia.

Specialists from Banat Museum have already studied the pieces discovered so far, and they intend to publish their findings in dedicated monograms.

The site found in Păru village is one of the most important sites discovered so far. This site belonging Bronze Age dates back to 12th-13th centuries in. BC as it was dated by conventional methods.

“Particularly important are the graves that shed new light on the funerary ritual at the end of the Bronze Age in north-eastern Banat. It was found that the dead were deposited on a pyre where items from the funerary trousseau were also burned.” This included “a table-altar of clay on which they brought funerary offerings, stone grinders and various pots that were used for the funeral banquet. Modern methods of radioactive carbon dating method shows that the necropolis at Păru dates between 1300 and 1200 BC” Ph.D. Florin Drasovean told www.tion.ro.

“In terms of inventory, there were discovered pots that were used in the funeral banquet and various fragments of altars, on which the deceased was cremated. Subsequently, the funeral was done in circular pits of 1 meter diameter, grouped in nests, probably because individuals came from the same family,” explained Professor Drasovean.

So far, it is not decided whether the site at Păru will be opened for tourists in the near future, but you can expect their findings to find way to important archaeological museums in the area. Still, there is no doubt, Păru is now the talk of the media, a plus that could bring an important flux of visitors to the region. If you plan a trip, it is good to know that this village offers no accommodation . There are hotels in Timisoara, (29.2 miles from Păru) and other major tourist resorts in the are.