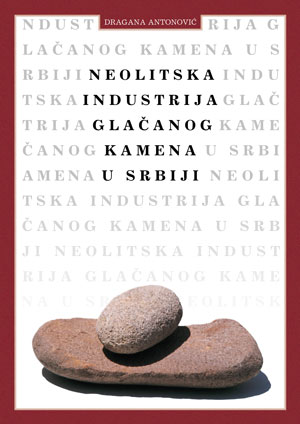 The ground stone industry in Serbia commenced to exist during the Neolithic and under conditions of a sedentary life. The term ground stone here is referring to all those artefacts that their final shape have acquired by grinding, as well as to unfinished objects produced by other techniques of stone manufacturing. Along with numerous types of tool sand arms various ornamental, ritual and artistic objects are also included.The basis for this study of ground stone industry enabled the material of the fol-lowing Neolithic localities in Serbia: Belovode, Blagotin, Crnokalacka Bara, Drenovac, Donja Branjevina, Gradac near Zlokucani, Grivac, Lepenski Vir, Lipovac, Ilica Brdo, Naprelje near Novi Pazar, Pavlovac, Petnica, Supska, Tecic and Velesnica. The raw material was thoroughly examined, predominantly macroscopically, a number of tools underwent measuring of specific gravity, while only a limited number of samples was subjected to microscopical and differential-thermogravimetric analyses The study of the manufacturing mode of tools and their use was undertaken through use wear traces, according to the traceology method .

The ground stone industry appeared in a full-fledged form during the Neolithic in Serbia. All the forms of tools, which will continue to appear until the end of the Neolithicin this territory, yet may be found at the oldest Neolithic sites. The level of recent know-ledge does not allow an unequivocal explanation of the initiation of the ground in Serbia. This, however, does not include the area of Iron Gates where this industry was formed due to sedentary life conditions as early as in Mesolithic period.