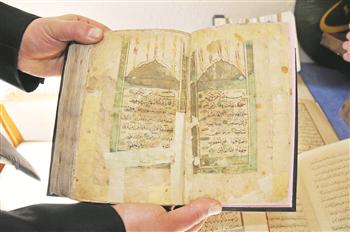 Many parts of Qurans, calligraphy that is 200 to 250 years old and two hand-written Qurans have been discovered in the attic of a mosque in the Central Anatolian province of Konya and delivered to the Konya Regional Calligraphy Art Library. The director of the library, Bekir Şahin, said the works had been found by chance during a cleaning of the mosque’s attic.

He said the workers who found the artifacts had called them. “We formed a commission and went to the mosque to get the artifacts. Forty pieces of calligraphic art dating back 200 to 250 years, 32 parts of the Quran, many Qurans and two hand-written Qurans were delivered from the mosque.”

Şahin said the artworks would be registered at the library after a one-year restoration process and displayed for visitors. He said they were quite important. “It is not known when they were thrown there, but workers saw them when cleaning the mosque and informed us. We thank them. We believe that there are similar artworks in the attics of many mosques. We once found similar artifacts in the garbage, but our citizens are more aware [now]. When they inform us, we go to the place.”

Şahin said the oldest artifact was 250 years old. “It is a calligraphy panel and has shapes on it symbolizing that the world is mortal. There is also a hadith of the Prophet Muhammad. It is an art treasure.”