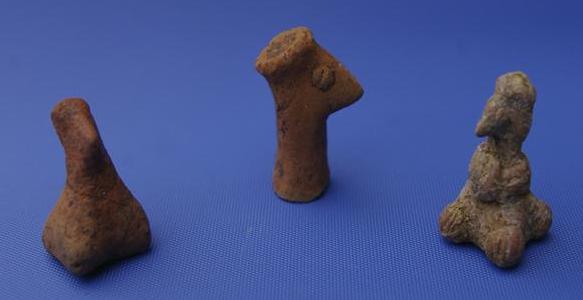 Archaeologists from the University of Southampton studying a Neolithic archaeological site in central Greece have helped unearth over 300 clay figurines, one of the highest density for such finds in south-eastern Europe.

The Southampton team, working in collaboration with the Greek Archaeological Service and the British School at Athens, is studying the site of Koutroulou Magoula near the Greek village of Neo Monastiri, around 160 miles from Athens.

Koutroulou Magoula was occupied during the Middle Neolithic period (c. 5800 – 5300 BC) by a community of a few hundred people who made architecturally sophisticated houses from stone and mud-bricks. The figurines were found all over the site, with some located on wall foundations. It’s believed the purpose of figurines was not only as aesthetic art, but also to convey and reflect ideas about a community’s culture, society and identity.

“Figurines were thought to typically depict the female form, but our find is not only extraordinary in terms of quantity, but also quite diverse – male, female and non-gender specific ones have been found and several depict a hybrid human-bird figure,” says Professor Yannis Hamilakis, Co-Director of the Koutroulou Magoula Archaeology and Archaeological Ethnography project. He continues, “We still have a lot of work to do studying the figurines, but they should be able to give us an enormous amount of information about how Neolithic people interpreted the human body, their own gender and social identity and experience.”

Excavations at Koutroulou Magoula were started in 2001 by Dr Nina Kyparissi (formerly Greek Archaeological Service) and this latest project began in 2010. The site is roughly four times the area of a football pitch and consists of a mound up to 18 feet high featuring at least three terraces surrounded by ditches. The people who lived in the settlement appear to have rebuilt their homes on the same building footprint generation after generation, and there is also evidence that some of the houses were unusual in their construction.

Professor Hamilakis comments, “This type of home would normally have stone foundations with mud-bricks on top, but our investigations at Koutroulou Magoula have found some preserved with stone walls up to a metre in height, suggesting that the walls may have been built entirely of stone, something not typical of the period.

“The people would have been farmers who kept domestic animals, used flint or obsidian1 tools and had connections with settlements in the nearby area. The construction of parts of the settlement suggests they worked communally, for example, to construct the concentric ditches surrounding their homes..

“There is no evidence of a central authority to date, yet large numbers of people were able to come together and carry out large communal and possibly socially beneficial projects.”

In later centuries, the settlement mount became an important memory place. For example, at the end of the Bronze Age, a ‘tholos’ or beehive-shaped tomb was constructed at the top and in Medieval times (12-13th c. AD) at least one person (a young woman) was buried amongst the Neolithic houses.

In addition to excavation, the project has conducted ethnography amongst the local communities, exploring their customs and culture and their relationship to the site. It has engaged in a series of community and public archaeology events, including the production and staging of site-specific theatrical performances, which turn into communal celebrations with food, drink and dance. In part, this aims to examine the importance of Koutroulou Magoula to contemporary communities and make the site an important feature in the social and cultural life of the area.