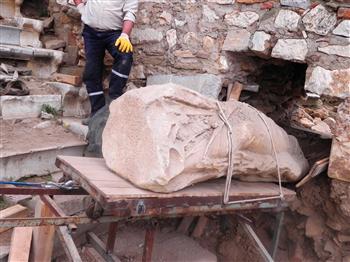 A 2,500-year-old statue of a woman from the late Hellenistic period has been unearthed during the excavations at the Metropolis ancient city in İzmir’s Torbalı district.

According to a written statement made by the Sabancı Foundation, new artifacts are being unearthed during the excavation of the ancient city, which has been ongoing for 22 years as part of a collaboration between the Culture and Tourism Ministry, Trakya University, the Metropolis Association, the Torbalı Municipality and sponsored by the Sabancı Foundation.

The head of the excavations, Trakya University Archaeology Department Associate Professor Serdar Aynek, said the headless, dressed, female statue was found buried in the city wall and that the statue reflected the richness and magnificence of the late Hellenistic period in its 2-meter length.

The headless and dressed female statue dates back to the Hellenistic period. DHA Photo

Aybek said that many statues found around the city walls during the excavations had been sent to the İzmir Museum.

Sabancı Foundation General Director Zerrin Koyunsağan said the statue might be a woman who managed the ancient city. “I think that thousands of years ago women had significant roles in society and city management. At the Sabancı Foundation, we are carrying out projects on the issue of social gender in Turkey. This is why this female managerial statue that connects with the work of our society is meaningful for us,” she said.