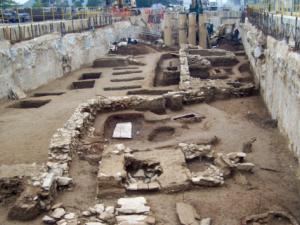 Thessaloniki, Greece – Excavation work during construction of a new subway network in Greece’s second largest city has discovered an ancient wreath made of gold that was buried with a woman some 2,300 years ago. Archaeologists say Friday’s find in Thessaloniki occurred on the site of an ancient cemetery in the west of the northern port city. A total of 23,000 ancient and medieval artifacts have been found during archaeological excavations connected with the construction since 2006.

Archaeologist Vassiliki Misailidou said the olive branch wreath made of gold was buried in a simple, box-shaped woman’s grave. It dates to the late 4th or early 3rd century B.C. Another eight golden wreaths were discovered in a single grave four years ago during subway work. The much-delayed construction project is expected to be finished in 2017