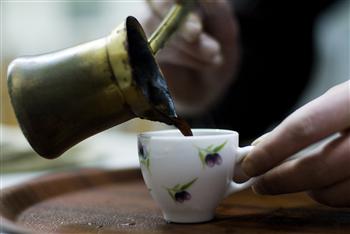 The Turkish Culture and Tourism Ministry has initiated proposals for Turkish coffee and mesir paste to be considered as additions to the world cultural heritage list.

Turkey has the highest number of registries on UNESCO’s Intangible Cultural Heritage List, said the ministry’s Research and Education General Director Ahmet Arı. According to Arı, a certain strategy had not been followed so far in cultural research, but now the ministry aimed to kill two birds with one stone in the selection of elements to be submitted to UNESCO’s list as well as promoted for tourism.
The intangible cultural heritage list comprises “intangible heritage practices and expressions that help demonstrate the diversity of heritage and raise awareness about its importance,” according to the UNESCO website.

Arı said that Turkey’s traditions like meddahlık (a eulogy show in Ottoman culture and entertainment), the whirling dervish ceremony, the aşıklık (minstrelsy) tradition, Shadow Theater, newroz, the Kırkpınar oil wrestling festival, the Alevi-Bektashi whirl ritual and keşkek (a dish of mutton or chicken and coarsely ground wheat), have already been included in UNESCO’s intangible cultural heritage list since the beginning of Turkey’s presentation of cultural heritage to the world in 2003, and the next elements would be Turkish coffee and mesir paste, a traditional sweet of the Aegean province of Manisa.

He said that as UNESCO accepted one file every year, they would give priority to the mesir paste, whose file would be evaluated during the 7th UNESCO Intergovernmental Committee Meeting in November. “Elements of Turkish culture such as aşure (noah’s pudding), marbling, amulet, Ajlat stone working, whistle language and eggy peggy will be evaluated in the future.”

A file would be prepared under the leadership of Turkey to include Hıdırellez-Saint Georges, a common cultural element in other countries as well, in the cultural heritage list, Arı said.

“Hıdırellez has an equivalent in all the Balkan regions and at least eight countries celebrate both Hıdırellez and Saint Georges. We will submit these two traditions as a ‘spring festival’ to the UNESCO list,” Arı said, adding that several people come to Turkey’s Cappadocia region for Saint Georges alone.
Last November, a Turkish meat dish known as Keşkek officially joined the over 200 listed practices from around the world.